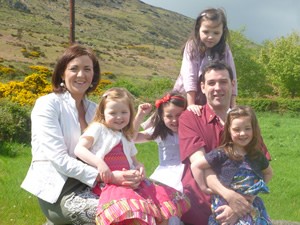 Niamh was born in Cork University Hospital, 12 minutes after her twin sister Róisín on 26th January 2010. We have two other daughters; Doireann (age six) and Grainne (age five).

I had had a perfectly normal pregnancy and we were not aware that Niamh had been born with any condition but we first noticed a lump on her cheek around September 2011.

The condition was initially suspected to be haemangioma (a build-up of blood vessels in the skin) and Niamh was treated for that. When this treatment did not appear to be successful she was sent for a consultation and then a biopsy and scan in Our Lady’s Hospital Crumlin in February 2012. Dr Michael Capra, Consultant Medical Oncology organized the tests and explained the results. The condition was described as a non-malignant tumour or cranial fasciitus. Niamh’s case was then referred to Mr Dylan Murray and his team at Temple Street as they had the facilities to surgically remove the tumour and reconstruct the skull in a single operation.

Niamh had the operation on 21st March 2012, going into theatre at approximately 11 am and returning from recovery room at about 6 pm. As far as we understand it, the tumour had been aggressive and had gone through a large part of Niamh’s cheek bone. Mr Murray removed a section of Niamh’s skull bone from the top of her head and used it to reconstruct her cheek bone. Thankfully the operation was completed without damage to any nearby nerves, eyes or ears as we had been warned that this was a possibility.

Niamh was brilliant and was out of her bed the day after surgery and within a very short space of time, there was no visible evidence of the procedure. We were just amazed by the ability of the medical team to carry out the operation with such skill and precision.

As far as her last checkup, there is no recurrence of the tumour and she is flying! There will be follow up scans at occasional intervals over the coming years.

Niamh is indistinguishable from other healthy children and participates fully in life with no evidence of any impact from her condition.