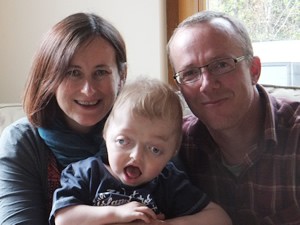 Finn was born in Cork Maternity University Hospital in June 2011. He is our first child but we are happily expecting a second at the end of June 2014.

I had a very normal pregnancy with Finn until I was 32 weeks pregnant and when having a routine scan it was picked up that Finn had an unusual head shape.

Finn was born with Pfeiffers syndrome where the plates in his head were permanently fused giving rise to a clover leaf head shape. Following his birth we were referred to Mr Dylan Murray in Temple Street who gave us a full explanation of his condition.

Mr Murray advised us that Finn would need a series of head operations up until he is a teenager in order for his head to grow.

Initially there was an urgent need to carry out a VP shunt to relieve a large build-up of fluid in Finn’s head and two more cranial vault operations followed after that and Finn will require a further four to five head operations within the next 10 years.

At the moment Finn’s development is behind by about a year, and he is currently receiving early intervention services in Cork, and they are very happy with his progress so far.

Finn is a very happy, sociable, contented little boy who has just started walking, and is into everything.

Things are good and you learn to adapt to challenges. We are much closer as a family now, as we don’t take things for granted in life, and have learnt to deal with difficult and worrying situations.