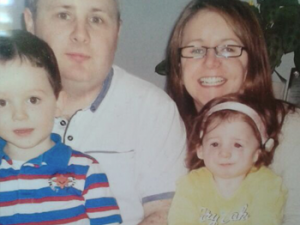 Saoirse was born on 29th May 2012 at the Rotunda Hospital, Dublin 1 with Treacher Collins (a syndrome that affects the development of the bones and other tissues of the face) following a very healthy pregnancy with no complications.

Elisha (Saoires’s Mam) also has Treacher Collins syndrome and had had specialist scans at the Rotunda Hospital during her pregnancy but nothing showed up. We then went for our own private 3D scan in February 2012 and we noticed that Saoirse had an under developed ear.

When Saoirse was born she was having difficulty breathing and had to be nursed prone. Her chin was too small which meant her tongue was too big for her mouth. She also had a cleft pallet which meant if she was on her back her tongue was rolling back into the cleft and blocking her airway.

On referral to Mr Dylan Murray at Temple Street, the plan was that Saoirse would have a Mandibular Distraction (a surgical procedure used to increase the length of the jaw bones) on 19th June 2012, after which Saoirse would be on a ventilator for a week or so to give the procedure time to work. Unfortunately Saoirse stopped breathing the night before the procedure was planned and it was decided to take her to theatre for a tracheostomy instead. A tracheostomy is an opening that is made through the skin in the front of the neck into the trachea (windpipe) and a tracheostomy tube is inserted into this opening to assist with breathing.

Saoirse had the Mandibular Distraction done on 10th July 2012 in Temple Street and the screws that were inserted had to be turned four times a day for 18 days which added 2cm to Saoirse’s chin to help her tongue stay in her mouth.

Saoirse then had an MLB procedure (microlaryngoscopy and bronchoscopy) to look into her throat and airways on 3rd August 2012. This showed no problems with her airway and the medical team was hopeful that she would be able to cope without the tracheostomy but the team tried to decannulate (take out the tracheostomy tube) on 9th August 2012 and Saoirse could not cope.

The team tried to decannulate again on 5th September 2012 but Saoirse could not manage and was taken to ICU and put on a ventilator to give her a little rest, where she spent three days.

Saoirse had the distractors removed on 19th October 2012 and another MLB.  Again the MLB showed no problem with her airway and Saoirse was successfully decannulated on 6th November 2012 and finally came home much to our joy on 15th November 2012. Saoirse was still being fed through an NG tube when she came home but had a peg tube fitted in April 2013, which she still has.

Saoirse had her cleft pallet repaired on 15th July 2013 and she is doing extremely well. She is eating a lot now but still needs one peg feed a day and an overnight feed but has no problems with her breathing at all. She wears a bone conductor hearing aid and can hear really well with this. She will have this surgically fitted at age three or four years.

We think she will have her ear reconstructed at age seven years but we have to confirm this with Mr Murray as there has been so much for us to try to take in.

When Saoirse is over 18 years, it will be her decision if she wants to have more surgery as she has no cheek bones and could have this done if she decides she wants it.

Saoirse is extremely bright and alert and her deafness does not seem to be affecting her. She is a determined little thing who knows exactly what she wants. She is feeding really well and we hope to have no peg feeds in the coming year. We just have to work on drinking as she still has difficulty with sucking.

Saoirse has one brother James who is three and a half years of age and does not have Treacher Collins.

Family life is fantastic. After spending five and a half months in hospital we never thought we would get to this stage. Life is as normal as can be. The peg feeds restrict us somewhat but it is a small price to pay.